Born in Bombay India, Primavera Boman has followed in the footsteps of her mother Hilde Holger. Like her mother who famously refused to be pigeonholed and believed in dance as total theatre, Primavera has embraced all the arts and media as a choreographer, dancer, filmmaker, performance artist, teacher, sculptor, jewelry designer, and the developer of her own form of dance and exercise therapy.

Interestingly enough, independent of one another, they were both fascinated and influenced by the Bauhaus.
In 1968, commissioned by H.P.Juda of Thompson Publications, who sponsored shows involving Art from the Bauhaus, she fabricated a 16 feet hinged sculpture at Saint Martin’s and choreographed, with the sponsorship of Sir Robin Howard of The Place, four dancers moving and intertwining with the sculpture as it changed from one configuration to another; Ronald Lloyd’s eight-track electronic percussion score cued all the movements.  It was performed on the turntable stage of the Mermaid Theatre—5 Situations. It ran for a week and was featured on the BBC television causing quite a stir in the press. It was the culmination of study in the sculpture department under Sir Anthony Caro at Saint Martin’s School of Art, where Ms Boman got First Degree Honors for her Diploma in Fine Art & Design, and her study in music, dance, and film. Apart from studying dance with her mother, she was a founder member of The London Contemporary Dance Company at The Place, and studied ballet with Kathleen Crofton– teacher for The Royal Ballet.

She had a scholarship to study dance in New York with Martha Graham in 1966, and went again to New York in 1969 on a Winston Churchill Travelling Fellowship, where she studied with teachers like Merce Cunningham and Maggie Black, and Zen.  Included in Ms Boman’s lectures was, Movement: Between Theatre and the Plastic Arts given at The Corcoran Gallery of Art, Washington DC.
She was a faculty member at New York University, Fine Art’s Workshop in Carnegie Hall, Theatre Dance, and The Alvin Ailey American Dance Center.  She developed Alignment Therapy, a body system to improve technique and health. Her innovative work in this field has been featured on television, in Elle (UK), Yoga & Health, Harper’s Bazaar, Self and The New York Daily News.
In New York, as a choreographer and multimedia artist, influenced by John Cage as well as her own Zen Practice, she produced and performed several major works including “Khu” at the Union Square Theatre, New York,  “Job” at La Mama, New York, “As You Like it” for John Hausman’s Acting Company in New York and multimedia events, at Theatre of St Clements, Bonino Gallery, and The Great Hall, Cooper Union, New York. She performed as a dancer in New York from 1973 to 1978 during which period she presented “Barbar the Elephant” with Raul Julia and Michael Vernon at the 92nd Street ‘Y’. In New York in the seventies she performed with Twyla Tharp, and Situ, a solo in Gamson’s Beethoven’s “Variation on a Theme”.  In 1976, one of her multimedia events, “Grey,” had the Primavera String Quartet perform Mozart’s clarinet quintet with clarintist Bob Fisher, a tall female Balanchine soloist, modern dancers, and a young boy, the son of deceased painter Horatio Torres (Torres Garcia) moving a hinged Mylar sculpture. Her 1975 piece, “First Season Change…2, One, O…Still or Cyclic, commissioned by Cooper Union, included slide projections, dancers, actors, musicians and film with a dancer in white crossing the stage, duplicating the performance of a dancer in black doing the same thing on film, while a male and a female actor, directed by (Tony Award winning director) Tony Tanner, changed the position of a large hinged cubic structure, while their relationship was breaking up!. Other works included “1=2=0; But the Second Time is Different from the First” at the Theater of St. Clement’s in New York, 1973, and a multimedia solo for Dinah Goodes at Hunter Playhouse in 1972.
In 1976 she co-directed a documentary film on Isaac Witkin, shown on PBS. Earlier, “Quartet”, a short film with dancer Eileen Cropley from the Paul Taylor company, and “Without an Absolute”, also with dancers and a moving sculpture. They were shown at the LAMDA, The Royal Institute Galleries and the Paris Pullman Cinema in London and have been donated to the British Film Institute’s National Archive.

Around New York, she has exhibited smaller sculptures.
As a jewelry designer, she developed the PRIMAVERA COLLECTION of Fine Jewelry sold in specialty stores and galleries in London, Paris and New York. These were written up in many high end  British and American magazines.

Primavera obtained a National Diploma in Fine Arts & Design with Honours from St. Martins; She is a recipient of the Winston Churchill Fellowship Award, 1969, and the Ludwig Vogelstein Foundation Award, 1977. She has received awards from Hemis Film, the 1977 International Festival and the Bronze Medal from the International Film and TV Festival of New York in 1976. 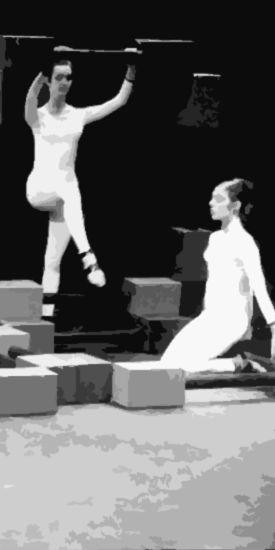